This thread has been viewed 1064 times.

This is from a repost from /r/futurefunk

Hey guys! I’m Cheyvan and I make music under the alias of Campioni d’Italia. I’ve been making electronic music since I was 14 (almost 10 years!). I’ve passed through a lot of aliases and genres like trance, techno, deep house, psy, breakbeats, etc. until I’ve discovered the world of vaporwave and future funk. I now make a mix of vaporwave, future funk, synthwave, ambient, IDM, etc. I don’t care about making a specific genre anymore, just let my brain “flow”.

Anyway, the last year I’ve released an EP on Keats//Collective with some future funk/vaporwave vibes and I wanted to share with the community how I make future funk.

You can check some stuff here:

I believe music has no rules and that’s the beauty of innovation but I also think that there are some “guidelines”. This is just how I make my things, you can always experiment and break the rules

Well, are we gonna make a 90% sample based song or a 90% original song with some samples? That’s the first question you should ask yourselves. For the sake of simplicity I’ll go for the first option which is the “”traditional”” way of making future funk.

This is my favourite part, and as everyone should know this is about exploring and listening music. Open your possibilities. Of course 80s Japanese funk music it’s great but there’s much more! Once you’ve chosen the song you wanna sample, there’s another question.

Should I use .wav? Mp3? Well, .wav will give us more flexibility but since we’re not aiming for that shining, crystal sound of modern electronic music and instead for a lo-fi experience we can take advantage of that and use .mp3 as well.

Ok, now we have our song. I use Ableton as my DAW so I’ll be covering some techniques with this specific software. The same things should be possible to do in other DAWs I just don’t know how

A) So, just drop the song on the sequencer, select warp and search for the very first beat, put a warp marker on in it and select “set 1.1.1 here”

Now, I like to know the tempo of the original song and for that I use Mixed in Key. After having the exact tempo, you should put it on the “Seg. BPM” box under the Warp option, then click “warp from here (straight)” and that should put the song which was in X bpm to play in 120 bpm. Then, you can change the sequencer tempo (120 bpm by default) to the original song tempo (the one we put on the “Seg. BPM” box, the same that Mixed in Key told us).

Finally you’ll have a sample running in its original tempo and in time. 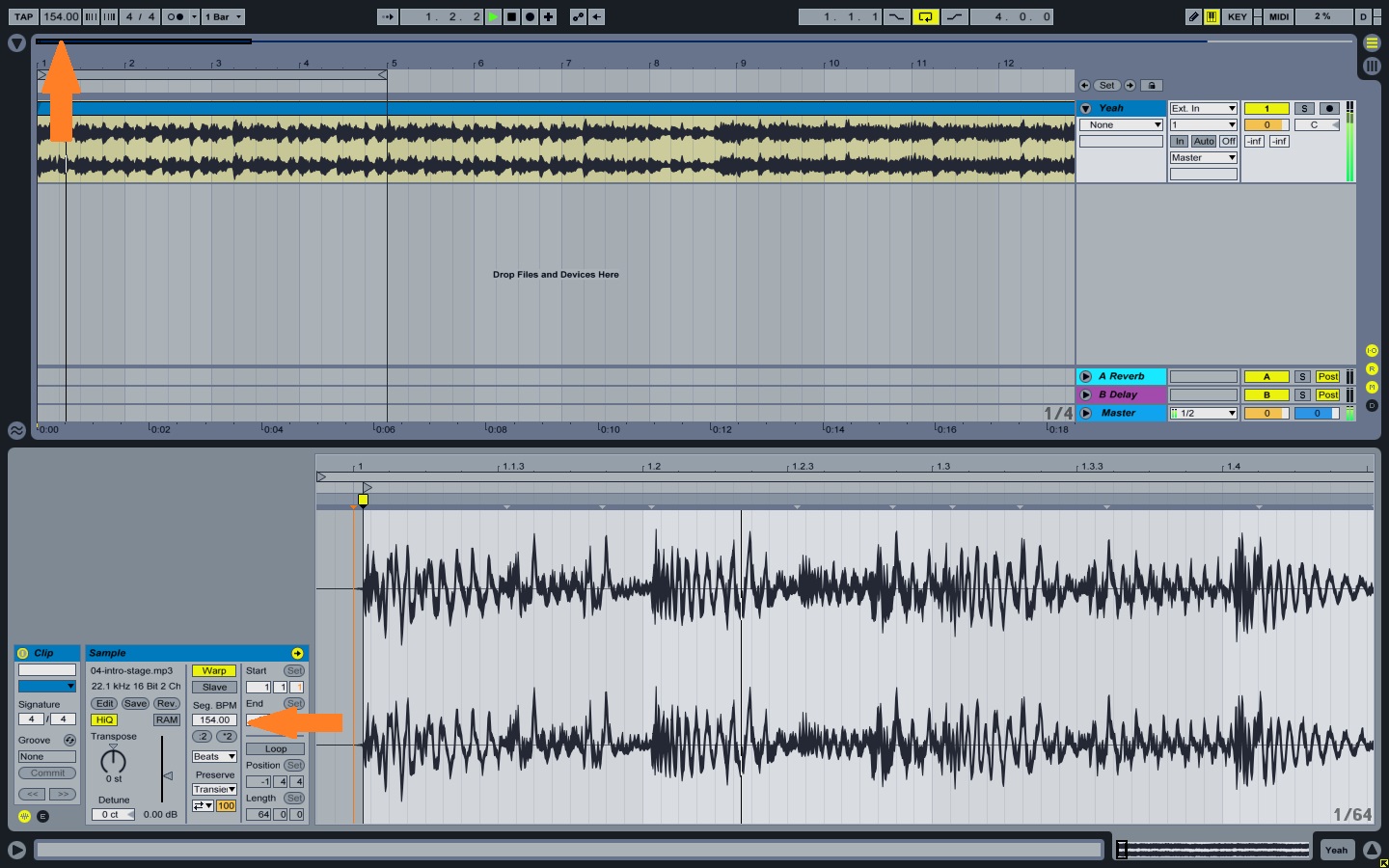 Now, there are 2 ways you can continue. First, you can change the warping algorithm. Where it says “beats” change it to “re-pitch” and change the tempo of the sequencer. If you make it slower it will feel more vaporwavy, faster will be more future funky. When I work like this I like to re export the song and run it on Mixed in Key again just to know the new tonality.

The second way is to keep more or less the same tempo and lowering or increasing the semitones with the transpose tool on your left. With this method it’s easier to know the new tonality of the song you just have to count the semitones. I hardly use the beats algorithm because it was made for working with small loops. I always prefer complex (or complex pro but it will change the sound a lot) sometimes I go for texture or tones, just experiment and see what you like more.

B) After finding the right tempo and vibe for your song it’s time to chop it and rename the parts. I usually listen the whole song again and start cutting and naming where the intro is, the verse, the bridge, etc. Then I duplicate the track and start messing around. I do this because I like to have one track for the original song without any changes (you can even unwarp it for the original tempo) and if you mess up some loop you can always copy the section again from the “clean” track.

Now, the second funniest part: experimenting with chopping samples. Yeah, sometimes I leave the loop as it is without changing it, sometimes I chop it and re organize it to make a whole new groove. It’s up to you and what you wanna achieve.

It’s really important that if you’re gonna chop your sample, do that BEFORE splitting the tracks. Why? Because if you split them first for the beat and the bass you’ll have to do all the chopping for the two tracks. It’s doing the whole thing again. Also, if you just rearrange the beat and not the bass track, some notes could sound dissonant.

Anyway, now that we have both things splitted, it’s time to throw an EQ for each track. For the beat track I always cut the low end around 150-180 hz leaving all the instruments except the bass for that track. I’ll try to also leave the snare punch “inside” this track. For the bass track I do the opposite, just cut the high and mid frequencies, I’ll cut around 150-180 hz just leaving the bass AND cut the low end at 30-35 hz (This is important in the mixing part).

Sometimes I work with Ableton’s native EQ, sometimes with Fabfilter Pro Q 2. In each case, the bass track should be in mono. Then, for the beat track I usually throw a compressor on it and try to catch the snares of the song and lowering them. In certain songs, the snare is more prominent and what I try to achieve is to lower it because I’ll put my own snares there. After the compressor I’ll also lower the frequencies where the snare is more powerful.

Surely, most of you should be familiar with this technique. We’re trying to make space for our own kick later.

Note: Remember you can also isolate the high/mid spectre of the song, delete the whole bass part and write your own bassline! I sometimes do that as well

Now it’s time to write those punchy drums which are gonna add that funky feeling.

A) For the kick I’d normally use a simpler and throw a kick sample. I don’t use those 808, 909 kicks or that vintage stuff. I prefer to have a more “modern” kick, a thicker, punchier one. Why? Because future funk relies a lot on the dancing beat and a nice punchy kick it’s gonna be our key to achieve this.

B) For the snare I like to use drum rack because normally I use more than one sample. In this case, I go for the vintage stuff. It can be a 80s solid snare combined with a clap and some other stuff. I just experiment with different things and try to cover the mid and high frequencies with my 3 snares/claps. When you’re done, EQ EACH snare (so 3 eqs) cleaning the low end and then throw a compressor after the drum rack so it will affect all 3. The compressor is just to have the 3 of them with more or less the same peaking.

C) For the hi hats I throw a drum rack because as well as the snares, I like to have more than one sample. I’d go for 2 closed HH and 1 open HH, sometimes even a ride. We all know how to write a basic 4/4 housy pattern but I suggest to go even further.
Make some variations with your snares, specially if you’re using 3 different types. Do the same for the hi hats, having the common off-beat HH is important but you can play with different rhythms.

After writing the drum pattern, a technique I like to use is to extract the groove from the original sample and try it on the drums. In order to do this, you have to right click on your sample and click “extract groove” BUT I prefer to consolidate the sample first.

If it sounds odd, it’s normal just click those little two arrows above the groove box and then the groove pool button.

Play with the timing, it’s like a dry/wet for grooves ( 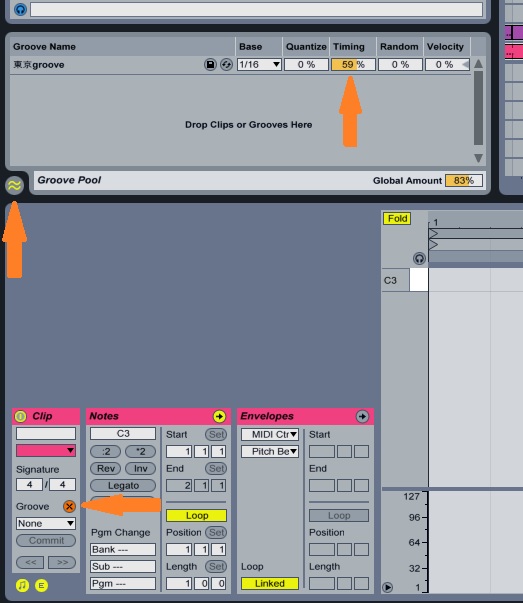 I like to create a new audio track, select the audio monitor as “in” and send the audio signal from the kick, snare and HH tracks to this new audio track which I call “drums” (duh) This will be useful later in mixing.

Note: you can also add some without-kick-loops to add more high end and fun to your drums! Try chopping them, reversing, glitching, etc :D

Cool, we have our drums and our sampled song playing together, it’s starting to sound more future funky as we go on. Let’s go for a really important topic now, the effects. You can’t always perceive them, they’re not the focus of attention in our listener but they make the difference. It’s like make up! More or less? Anyway, the key with this stuff is to add tension to the song.

When we are making danceable music tension and release are your friends, and if you know how to manipulate them you’ll make cool beats. I always put all my effect grouped in an effect bus track. I start with the cymbals: you can use one or more crashes and using reverse crashes it’s gonna add tension to the song.

If you pitch up a crash you can get a splash! (for drummers) Then, the common white noises. They’re excellent for tension and release. However, when I make future funk I don’t like my white noise to be so obvious and prominent (as in trance). After this tension/release game, you can add atmospheres, textures, small fills but this is a really experimental field.

Finally, I use around 4 to 5 aux sends to add some effects. Normally I have a long and a short reverb, a ping pong delay, a simple delay with different ratios, maybe a phaser or flanger and new york compression (later in mixing).

If you wanna achieve a vintage, futuristic, dreamy sound then reverbs and delays are useful. Vaporwave uses a lot, Future funk? Well, not as much as vaporwave but it’s up to you. I always add some reverb to my snares, some (less) to my HHs AND to the original sample. It’s a nice trick to make everything more “dreamy”. Also, for each aux send I put an EQ cutting the low end at 200 hz. Wanna add reverb to your bass? It’s ok as long as you don’t mess up the low end.

I’ve tried to sum up a lot because it would be really extensive otherwise. This is just the foundation of Future Funk, not the entire journey! The other half of achieving a good song consists in mixing and mastering. I couldn’t write a lot about it, it would absurdly long but if I see a lot of you wanna know more about mixing and mastering I’d happy to write a more in depth tutorial about that in the context of future funk (where the real magic comes!).

Anyway, thanks a lot. This is an amazing community that’s why I wanted to share some of my knowledge :D