In Office by Home&Office (me) ... officesoft? You tell me!

This thread has been viewed 1952 times.

I recently put out a new album for my project Home&Office, and here's the first track from it if you feel like checking it out! I don't know exactly which vaporwave subgenre to stick this into, but it's all office-themed and tends to bounce between some funky/jazz-fusion sounding stuff and more atmospheric sounding stuff. If you like it, I have more stuff on my Bandcamp (link under my avatar). Anyways, let me know what you think!

[soundcloud]https://soundcloud.com/andy-peterson-330988174/private-memo[/soundcloud]
Success is inevitable. All you have to do is say the word. 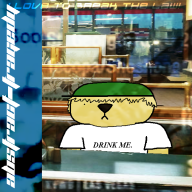 if you wanted to show someone that vaporwave is more than slowing down old smooth jazz than this would honestly be the premier kosher choice for doing so because it gets by the nostalgia or hauntology (whatever word you gotta use) without (or atleast without sounding like) being ripped from other sources, and even if it was, it sounds like it's actually an artifact of the 80s & early 90s. I feel like most vaporwave is distortion of the past (Floral Shoppe, Haircuts for Men, The Computer Trilogy), this is just that

I think this sort of "cyberjazz" also has more of an appeal when it comes to "hauntology" than shit like future funk bc u can probably create a lot more feelings than "oh look it's anime girls and stuff, we're on the beach, don't you wish you were here" (impo atleast)
BREAKING - The Green M&M Has Been Spotted Wearing A Mysterious New Bra; But Not Everyone Thinks It's Good

Glad you like it, thanks! You bring up some good points too. The mutation aspect of vaporwave is definitely valuable and there are many artists that do it well, but I found that straying from the standard "formats" allowed me to express a much wider range of feelings and tell a more personal story.
Success is inevitable. All you have to do is say the word.

- Dillard Maxis ⛱
Virtual Cafe Awards
You must log in or register to reply here.
Similar threads

Open in popup
Jackeline: Literally, none of them is gonna remember this in a few weeks lol A moment ago
Chat 8
Menu
Log in
Register
Install the app