This thread has been viewed 1914 times.

Status
Not open for further replies.

What is Vaporwave?
Vaporwave is a subculture that had started emerging at around 2010, and has become more prominent in the early 2010's. The term originates from the term vaporware. It is considered a musical genre, as well as having a visual aesthetic. The genre has since developed and expanded, and the following is an attempt to describe "classic" vaporwave.

Characteristics
Vaporwave is characterized by appropriation, imitation and recontextualization of pop culture artifacts from the 80's and 90's. It has associations with the period's retrofuturism and cyberpunk. Visually, it is related to pop art, collage, and digital art but it is not limited to these. It tends to choose and deconstruct already kitschy and/or banal source material, usually associated with mass production, though it can choose any 80's and 90's pop culture artifact. The appropriation and imitation are done in a style that is deconstructive, recontextualizing the material and emphasizing artificial elements.

These techniques, among others, give Vaporwave its crucial "meta" quality. In other words, Vaporwave is not a direct imitation of the past, but rather it is about the past; the experience and memory of the past. It is looking at the past through a certain lens.

Appropriates, imitates and recontextualizes pop culture artifacts from the 80's and 90's, typically kitschy and/or banal material.
Utilizes audio and visual techniques and manipulation to emphasize the medium's artificiality and medium-ness.
Here is a guide introducing Vaporwave essentials and where to download them.

5 Using simple melodies, lo-fi and MIDI instruments, and repetitive structures are some of the techniques used in accentuating kitsch.

History and Development
Daniel Lopatin (as Chuck Person)'s 2010 release, Chuck Person's Eccojams Vol.1 and James Ferraro's 2011 release, Far Side Virtual are regarded as a catalyst for the genre - perhaps backgrounded by the 1980's revival that started to take root in the early 00's and maturing late in the decade. The genre would later on be solidified by Ramona Andra Xavier (as Vektroid) who also goes by aliases including Macintosh Plus, New Dreams Ltd, PrismCorp, Laserdisc Visions.

In 2013, the Vaporwave label Fortune 500 popularized the term "hypnagogic pop" to describe the kind of music they were releasing, which was a more rhythmic and musical and less experimental than previous vaporwave. Even later on, around 2014, the genre diffused, with vaporwave elements being mixed with elements from other genres, spawning genres including Vaportrap, Future Funk, and Oceangrunge. This post-vaporwave phase also includes the work of proto-vaporwave and vaporwave acts who have gone on to produce other work: such as Daniel Lopatin (as Oneohtrix Point Never), James Ferraro and Saint Pepsi.

What is Vaporwave Not?
Vaporwave has its own aesthetic, but it is easily confused with other movements. While definitions and identities are fluid, we will make an attempt to differentiate them nevertheless.

Musical Cousins
Most of these genres along with Vaporwave arguably rose from the 1980's revival that matured by the late 00's. Like Vaporwave, these genres imitate the music of the 80's and are both nostalgic and campy to a degree. However, what differentiates these from Vaporwave is Vaporwave's recontextualization of the pop culture. These genres tend to be clean, direct imitations of 80's music rather than deconstructed versions with manipulations that accentuate "medium-ness" (coming from a television, radio etc.); they don't quite have characteristic #2. Additionally, Vaporwave has a stronger association with mass production, commercial, and kitschy artifacts, using elevator music as a source material, for example. 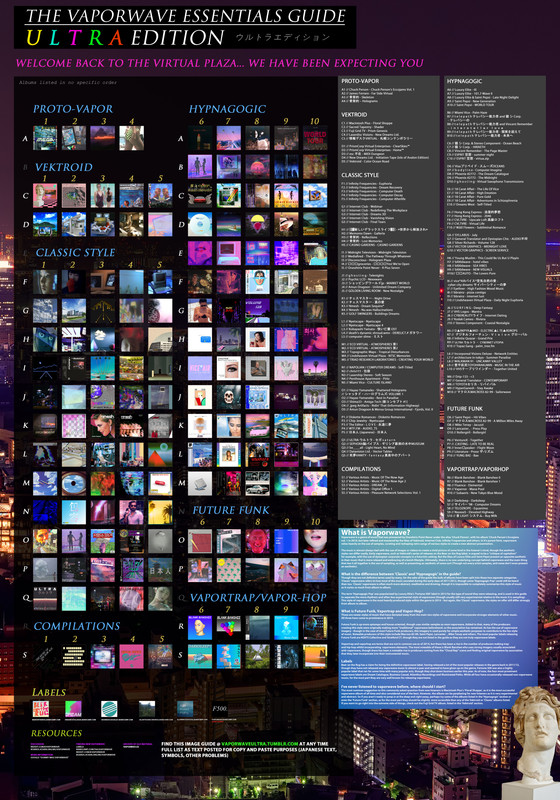 Status
Not open for further replies.

View archive
Open in popup
IlluminatiPirate: A window to the past Today at 11:28 AM
Chat 3
Menu
Log in
Register
Install the app